They carved out their sound in Olympia, Washington’s capital city, just a commuter bus away from downtown Seattle. Their genre is hardcore—grungy hardcore—and they’re a band consisting of three guys in their twenties: one on bass, one on drums and a frontman on guitar and vocals. Their songs addictively juxtapose the blistering heft of their howling pitch and the misanthropic laments of penetrative lyrics. Oh, and the record label responsible for their debut? The Pacific Northwest’s own, Sup Pop.

Before you go ahead and guess who were taking about here, let us save you the trouble. It’s not Nirvana.

The band is Strange Wilds and here’s why you should know them. A rock trio born and raised in Olympia, bandmates Allen Trainer (drums), Sean Blomgren (bass) and Steven Serna (guitar and vocals) grew up entrenched in the area’s local music scene. In other words: they were breastfed on Nirvana, and it shows.

While evidently following in the dusty, plaid-ridden footsteps of Nirvana before them, as a band, Strange Wilds has created a sound distinctly their own. Listen for yourself. Their debut record, Subjective Concepts, drops July 24th.

An authority on the area’s hardcore punk scene, how could we not ask the Strange Wilds frontman to provide some insight into director Brett Morgen’s Kurt Cobain: Montage of Heck, the latest biopic about the musician?

When talking to Serna, two things become clear: 1) the musical legacy Kurt Cobain has left in Olympia, is untenable; and 2) when a musician is born and raised playing in the area, a comprehensive knowledge of the Cobain and Nirvana is essentially instinctual.

“It’s what I nerded out on when I was a kid,” admits Serna.

Right off the bat, it’s evident we picked the right man to play film critic. Serna is contemplative and clearly passionate about the film (which next plays on HBO June 12th) and its subject matter. Over the phone, he’s reserved at first, a little shy, but becomes animated when talking about being on the same label as Nirvana…about anything Nirvana, really.

He’s not quite what one expects from listening to his music, and that, for Serna, is kind of the point. Every musician is more three-dimensional than the version audiences know, whether they see them on stage, or read about their life in an article, or listen to their music…and this includes Cobain, whose life and death presents a more complicated reality than any fan can hope to comprehend. “I think people like to focus on the dark side of his life,” postulates Serna about the media and public’s fascination with Cobain. Does Morgen manage to break the trend and illuminate the other side of the Cobain mystery? Read on to hear what Serna thinks.

So before we get into the film, let’s talk a bit about your band’s debut record. Are you excited to be joining the Sub Pop family?

It’s weird, growing up in this region, Sub Pop always feels far away. You never think you will get signed to Sub Pop or have anything to do with the label. It’s been pretty cool to have it actually happen. We got to record in a really nice recording studio, one that’s legendary in the area. That was a really cool experience. We are all really stoked on it, we wanted to record locally.

I always wanted to work with Robert Lang, I mean, Nirvana recorded there, the Foo Fighters recorded their first album there. It seems like a really cool place, where a lot of Seattle bands have played. A big reason that I really wanted to record there is that they have a huge open room, where you can really get that huge drum sound that I was looking for. Also the atmosphere of the place; there is so much history there tied to the type of music we play.

You mentioned Nirvana had recorded there. I think that’s a perfect segue for us to start talking about “Montage of Heck.” What did you think of the film?

I liked it, and it was definitely interesting to see. I’ve read books about Nirvana and seen the other documentaries…

And…it just kind of felt like a rehashing of a lot of that same stuff. I liked it, but I feel like they glossed over a lot of Nirvana…when they lived in Olympia. There was no other bands from that time, the bands they toured with weren’t in it at all. But, I don’t think that was the purpose of the documentary. 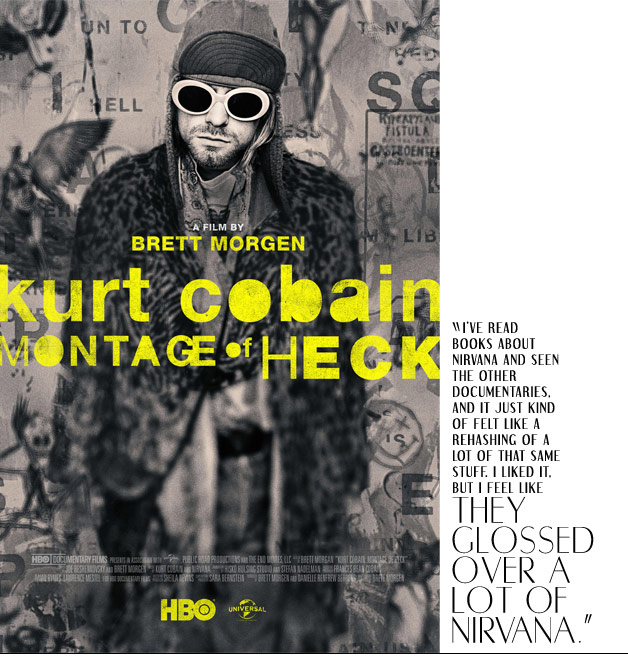 What do you think the purpose of the film was then?

I think it set out with a goal to capture a certain mood of Kurt’s life and not the whole aspect of the band Nirvana and their whole career.

It doesn’t sound like you’re that enthralled by Cobain’s dark side, more him as a musician.

I was captured growing up, and even today, by the grittiness of the music and the sound, but not so much with the emotional aspects. I feel like I can connect on the same level of living in the same area, where most of the year it’s dark and rainy, and there isn’t much to do. At the same time, that is why we make the music, to try and escape that. I mean, I still love living here. The summers are beautiful, and there is so much art. But we do the music to travel and experience other things.

Do you think a documentary that showed a lighter side of Cobain, in addition to the darkness that he’s become associated with, would have been as much of an audience draw?

I think there was plenty of the lighter side in this documentary, what I was wishing for more of was people who were close to the band sharing their stories, not just family members. Anyone who is a fan of the band and Kurt would appreciate something like that, I’m sure. But this was supposed to just be about Kurt, so I understand them focusing more on the personal stuff.

Do you think Cobain’s family’s involvement in the film making process, particularly having Frances Bean Cobain as the executive producer, slanted the perspective of the film at all?

I think they had good intentions. I’m glad they were okay with the filmmakers digging into the Cobain archive though. It was neat to see that more personal side of things.

You seem pretty well versed in the biographies out there about Kurt Cobain. Where would you rank “Montage of Heck” among those?

It’s up near the top. It was well made and I enjoyed it. I think as a fan, it’s just that I want more, and I’ll always want more. It seems like most things done about Nirvana always go from, “they were from Aberdeen” to “they were the biggest band in the world” way too fast. There was like three or four years before they blew up, and I’d like to hear more about that era.

Yeah, it does seem like writers and filmmakers like to focus on the personal stuff whenever documenting Cobain’s life, and glaze over how he built his career with Nirvana.

I feel like everyone who does these things on Nirvana, and similar rock stories, always want to focus on the tragic stuff, and yes, that’s part of it, but there was so much of the story missing. Now I’m a little bias because I’m from here, but there was barely any mention of Olympia. This was the place that Kurt wrote most of the songs for Nevermind, and some of the songs for In Utero…their most popular stuff. I could name quite a few bands that shared stages and the road with Nirvana, but none of the people from those groups were interviewed for this documentary. I understand there’s not always time for that kind of thing, but I would of appreciated it. Hopefully if there is ever an “official” documentary about Nirvana as a band, more of that stuff will be explored. On that note, what do you make of the absence of Dave Grohl from the film? What do you think he could have brought to the discussion?

I heard he was interviewed and it will be added in later. It did feel weird that he wasn’t in it though. I felt like there could have been more from Krist too. These were the two people who shared that thrust into the spotlight with Kurt. I’m sure Dave has all kinds of memories of living with Kurt and what it was like to tour with him and write music with him. Those are the kind of things I would like to hear about.

As a musician who has been influenced by Nirvana, what do you personally make of the dark side of Cobain highlighted in the film?

Is part of the public appeal of the “rock star” though, about “extreme” personalities and behavior. I mean, is that why “Montage of Heck” and other films and books before it have concentrated on those aspects of Cobain’s life and career?

I think parts of the media, journalists…no offense…will always focus on the extremes because that’s what sells their paper, magazine, book, TV show. Appeal, for me, lies mostly in the music. You could take away all of the “extreme” press a band like Nirvana had, and they still would have been a great band. I don’t ever think about what some musician said or did that was outrageous when I’m looking for something to listen to, I think about how their songs inspire me.

Well said. In your own experience, do you need turmoil in your life to write and create the kind of music that you do?

Not specifically. The turmoil may help spur thoughts that I put into lyrics and songs, but there’s a certain feeling I get when I write things, and that’s actually a positive feeling. The result may come out gloomy or negative sounding, but I’m always proud when it strikes that chord within myself. To me, writing music is the same as any other form of art. I have something inside and I need to get it out. I don’t have to be feeling down to make art though….it’s just as inspirational as positive things happening in my life.